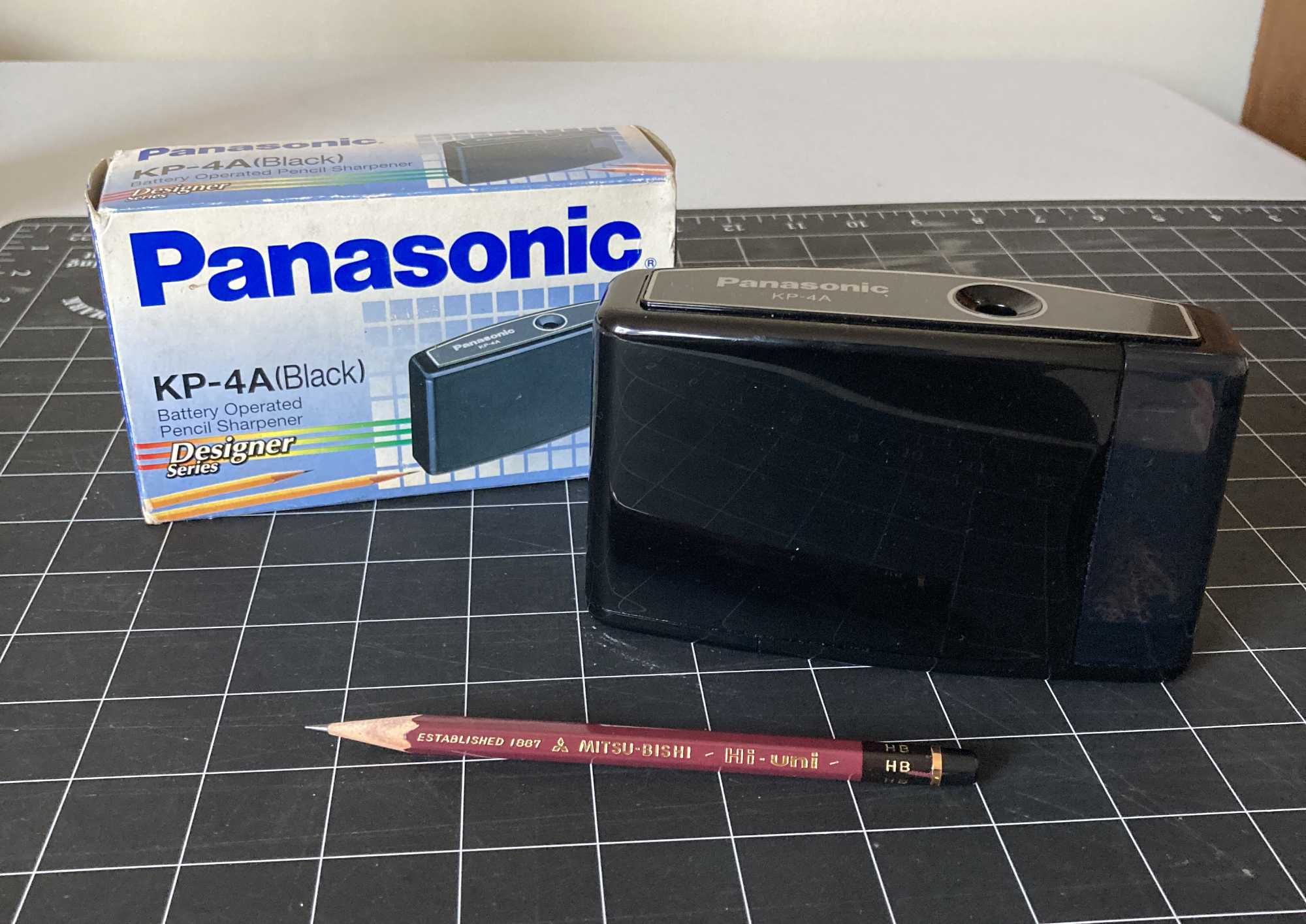 I waffle in between different sharpeners all the time. I loved the KUM Automatic 2 Step Longpoint sharpener for quite a while, but it gets weird sometimes and can snap tips off of my perfectly pointed pencil. Most hand crank sharpeners are annoying and not very portable friendly. I like my Panasonic KP-350, and I also enjoyed my KP-110, so maybe a portable electric is the ticket?

Watching the 10 Years with Hayao Miyazaki documentary also really got me jonesing for a portable electric sharpener. He’s just all business with it, it’s like a totem for him. He reflexively slaps a pencil in there and then gets back at it without a second thought, in my mind making it even easier to get to creating with little distractions. Most of the ones today look uncool as all get out, and even then the Panasonic KP-4A I bought off of eBay doesn’t look as cool as the ones he uses, but it’s still cooler than most. Well, that’s not the whole story.

Before trying the KP-4A, I tried the Panasonic KP-2A. The one I got was used, but on the cheaper side so I figured I’d throw caution to the wind and give it a shot.

It produced the absolute dullest point I’d ever seen from a electric sharpener. I hoped it was just something lodged inside (a broken off point possibly) and someone suggested taking it apart. That didn’t work either.

I gave that away, and after my research I found a Panasonic KP-1A for cheap and with the box, potentially new old stock (NOS they call it on eBay). It didn’t even work. Zero for two.

My birthday rolled around this year and I wanted to get myself something, and I had just got back into electric sharpeners for home use again. I was looking at Amazon and about to press the trigger on something like this or that and I saw a self described NOS KP-4A with the plastic and everything still on it, and very little signs it had ever been used. I went for it.

The box looks neat, very 90’s. The sharpener is sleek looking, but a little bigger than you’d ever imagine in real life. It takes 4 AA batteries, so it’s not that shocking at the end of the day. The compartment that holds the shavings is nice and tight, haven’t had any issues with shavings ending up in my book bag.

But hows does it sharpen? Not bad. It’s not the longest point, and it’s not the sharpest point, but it’s a good point. A reliable point. 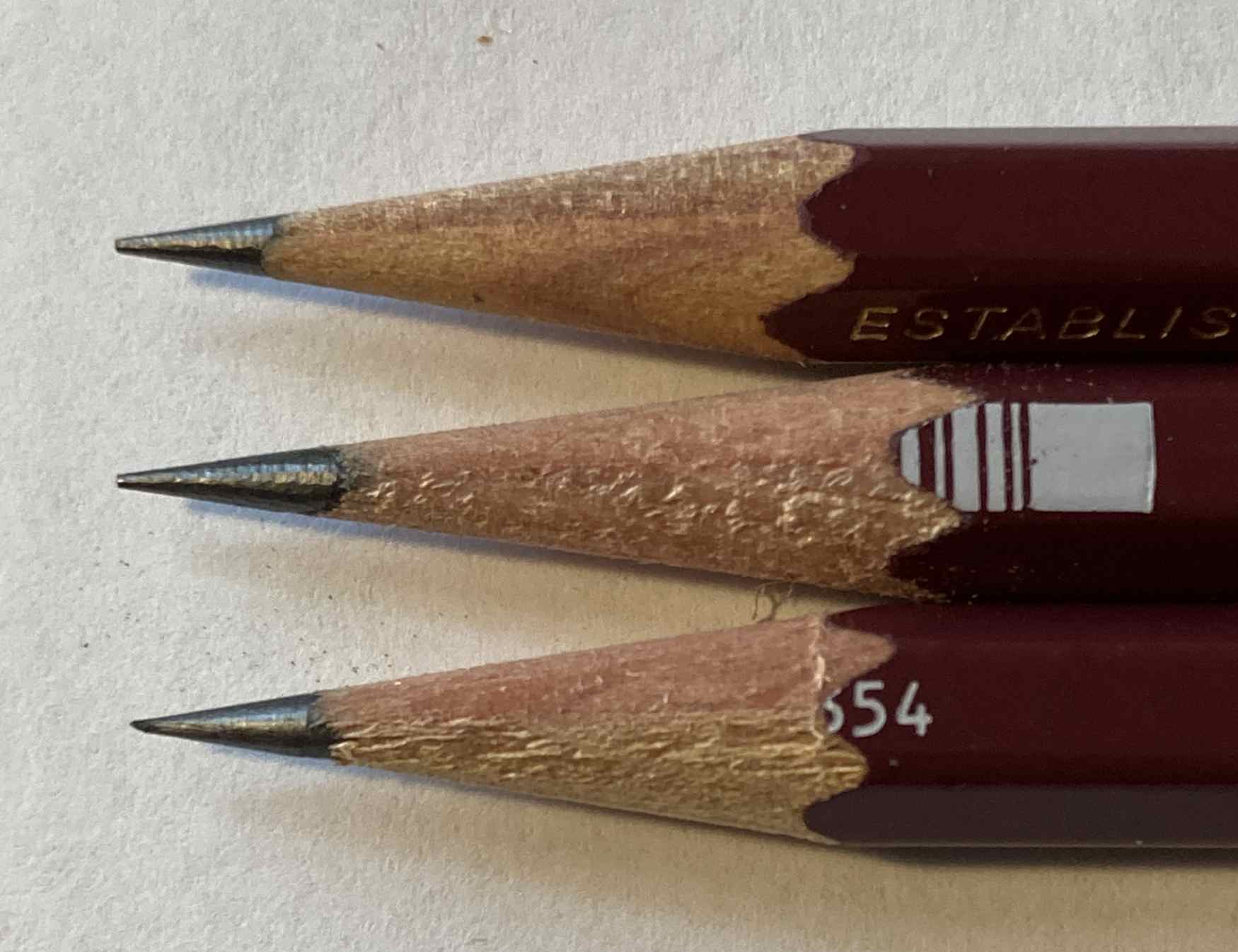 Is it the end of the world that the KP-4A doesn’t get it as sharp as humanly? Not really. It’s perfectly serviceable, and a lot less mess and work to get it’s point. That’s a perfectly fine tradeoff. Also the KP-4A is consistent. The Kum Automatic is inconsistent, sometimes it’s super sharp and sometimes it ain’t. Takes much longer to get that nice point. So while it can create the nicest point, it’s not a guarantee. The KP-4A is a guarantee good enough point every time.

The biggest problem is there is not an automatic stop when you are sharp. There is a sound difference, so there is a bit of a tell, but you will be eating away more pencil with this thing.

Would I recommend the KP-4A over a newly made portable pencil sharpener? I dunno. I haven’t used any modern ones. I got this one for nearly the same price as a modern one I posted above, maybe spent more in shipping that I would have by ordering new. I like the design a little more than the modern ones. I got no idea if the performance is any better or worse. I say if you can find one for a comparable price and it is NOS it’s probably not a bad bet. I wouldn’t pay more than $50 for this thing, thats for sure (I’ve seen them pretty high up there before on eBay).

I’m going to give the Panasonic KP-4A Pencil Sharpener the final score of 4 Zaffino Crazy Face Franks out of 5. Not a bad buy at all.