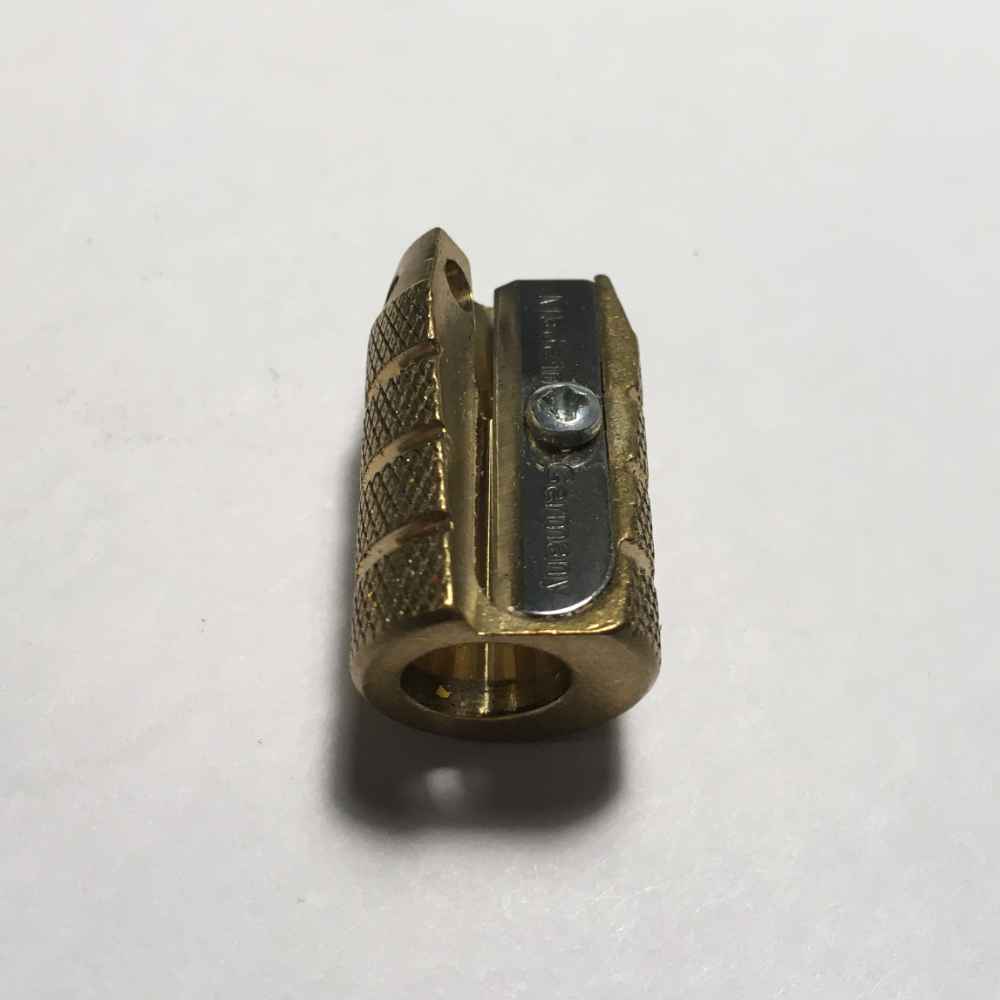 I’ve really gotten into pencils lately. First I started playing around with different sized mechanical pencils and leads (0.5 mm, 0.7mm, and 0.9 mm of the Pentel Sharp line mostly), then to 2mm lead and lead holders, then re-discovering Prismacolor Col-Erase Colored Pencils, finally to just embracing the grand daddy of them all, the simple wood encased pencil. I blame this mostly on Caroline Weaver (no relation), the owner of CW Pencils in NYC, and the book she mentioned in her shop, The Pencil: A History of Design and Circumstance by Henry Petroski (who also just happens to be a professor at Duke University here in Durham, NC).

I got a bit obsessed, and I’m just barely getting out of being obsessed. In future posts I’ll go over a few of the different brands of pencil I’ve been using, but the thing I’ve used the most (and kind of fine the most interesting) has been the Möbius+Ruppert Grenade (sometimes called “Granite”) Brass Bullet.

This pencil sharpener feels substantial, way different then any plastic or magnesium sharpener I had ever used. It’s also a fairly unique shape from any pencil sharpener I’ve ever used, more of a cylindrical prism than a box or wedge shape. It looks like it might be gimmicky but it actually works really well, and it has a nice “knurled” exterior (I love this term and my girlfriend thought I was making it up). I haven’t had any issues with any pencils I’ve sharpened with the Brass Bullet thus far. 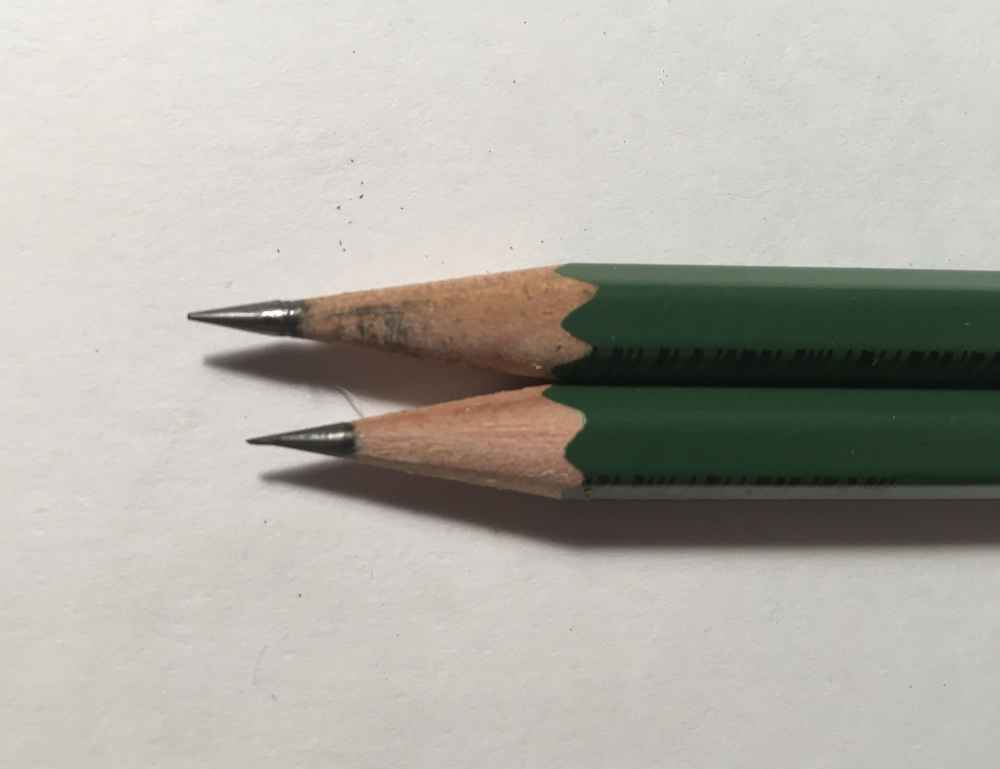 The point that the pencil produces is a medium point. Above you see an example of a long point from a Kum Automatic Longpoint pencil sharpener compared with the Möbius+Ruppert Grenade Brass Bullet on the bottom. It’s not the longest point, but it doesn’t bother me at all, especially for a sharpener that can fit in my pencil case, or on a keychain. Also, a 1 step sharpener is just quicker (those 2 step sharpeners can get tedious at times). Shavings usually come off in beautiful long winding wood sheets with no issue.

One of the reasons I wanted to write about this sharpener is that it has a bit of confusion around it. Alvin Drafting also “makes” a brass bullet sharpener: 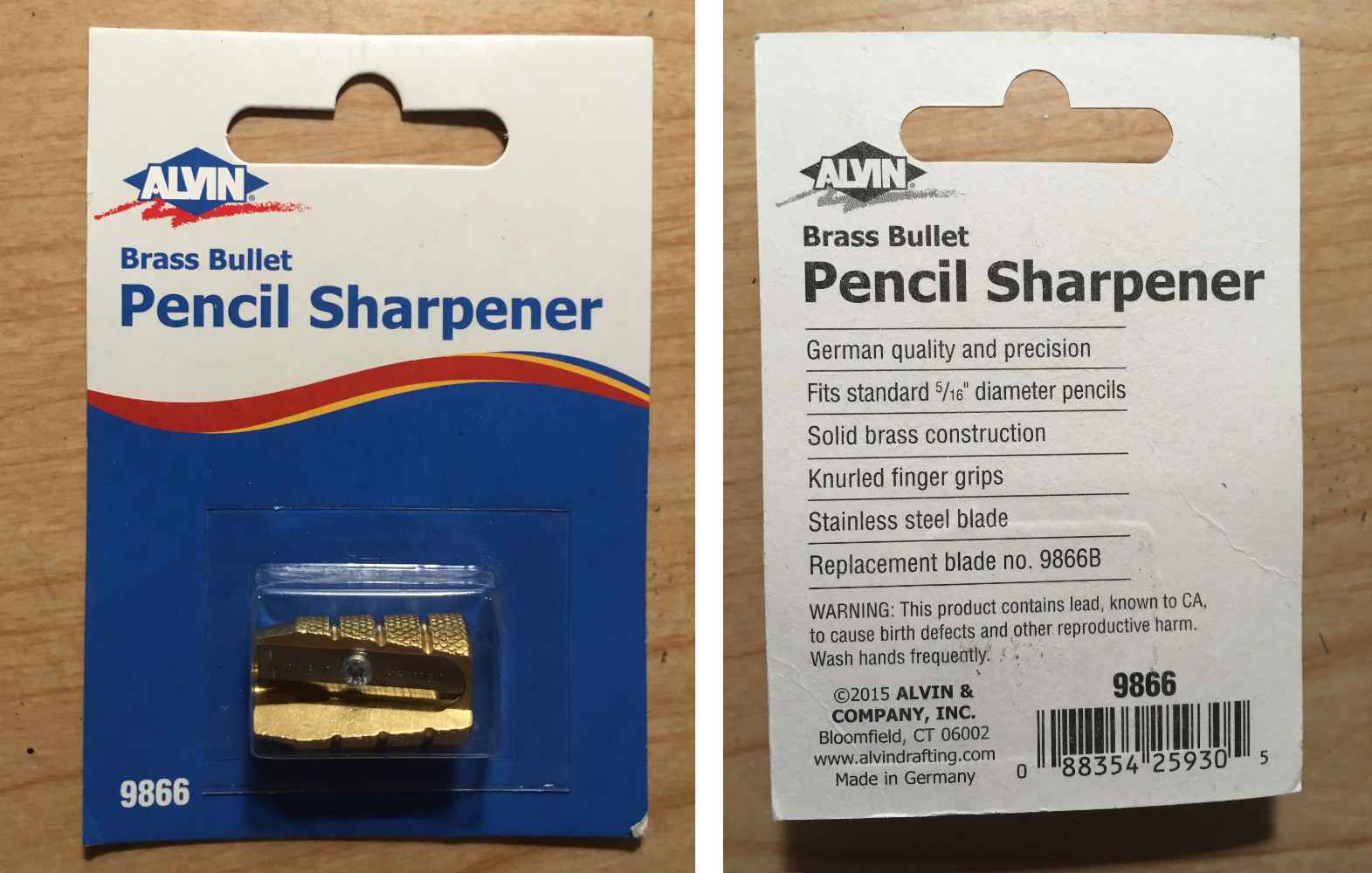 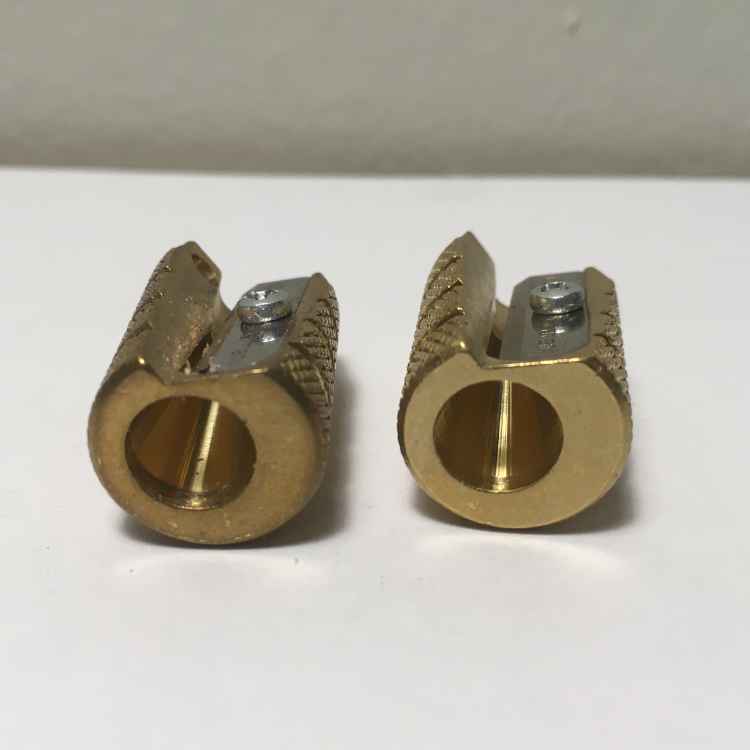 There is no difference between them. They are the same size, shape, design, and produce the same points, and even have the same “Made in Germany” razor blades. The only difference between these is that the M+R Brass Bullet I purchased from CW Pencils has what they call a convenience hole for putting it on a key ring (it’s technically the MG 0604 0090 model). Alvin actually sells a few of Möbius+Ruppert’s pencil sharpeners under their name in America, so if you see the M+R logo on you Alvin sharpener, that’s why. 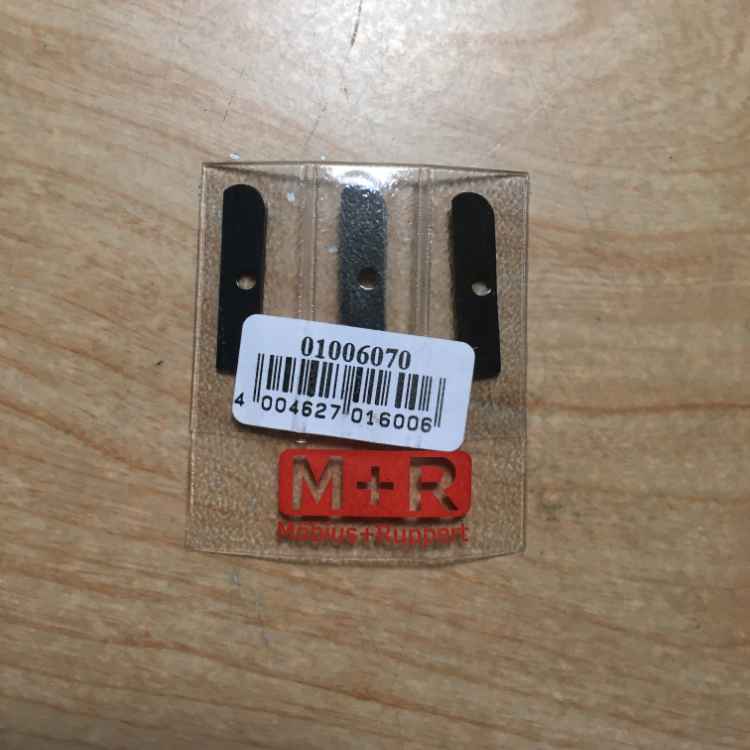 The replacement blades are also confusing. From everything I’ve read, the replacement blades that they sell for all of their other varieties of pencil sharpeners are different from the Brass Bullet blades. Alvin says that their replacement blade model number is 9866B, and I’ve seen mention of the M+R order code being either MG100-6060, MG100-6050, or on the ones I ordered from CW Pencils it looks like it may be MG100-6070. It’s really confusing, so if you know exactly which one it is contact me and I’ll sleep a little more soundly at night.

As far as how often they’ll need to be replaced, I’m not sure yet. I’ve used it about a month and I haven’t needed to change it yet. Depending on your use I suppose, but I’ve sharpened loads of pencils, fresh and already in use, and it’s still chugging along fine. Judging by how it’s gone so far, I’ve purchased a multi-year stock pile of blades (9 in total!). I also purchased a second sharpener (if you couldn’t tell from the comparison photos), one to go in my travel pencil case for sketching on the go, and one for the studio desk.

I’m giving the Möbius+Ruppert Brass Bullet 5 Zaffino Crazy Face Franks out of 5. It’s solid as a rock, doesn’t contain any plastic (so you will have a harder time stripping the screw attaching the blade!), and you can find replacement blades from multiple websites and sources. The thing should honestly last a lifetime.