At the beginning of me exploring brush pens, I stuck to synthetic bristle or natural hair brush pens. Things like the Pentel Pocket Brush Pen, Kuretake No. 13, Kuretake No. 40, the Pentel Pigment Brush Pen, and eventually the Platinum CF-5000. I personally love the control of a bristle brush, and finding the perfect one for work on the go drawing and inking filled my pen based passions for a few years.

Hard tip brush pens, on the other hand, I rarely seeked out. My first was the Faber Castell Pitt Brush Pen, but since the tips always got so grimy after the first 10 minutes of use, it tainted my opinion of all hard tip brush pens. Also a pro tip for Pitt brush pens: you can pull out the tip and rotate it to get a fresh second side, if you didn’t know. 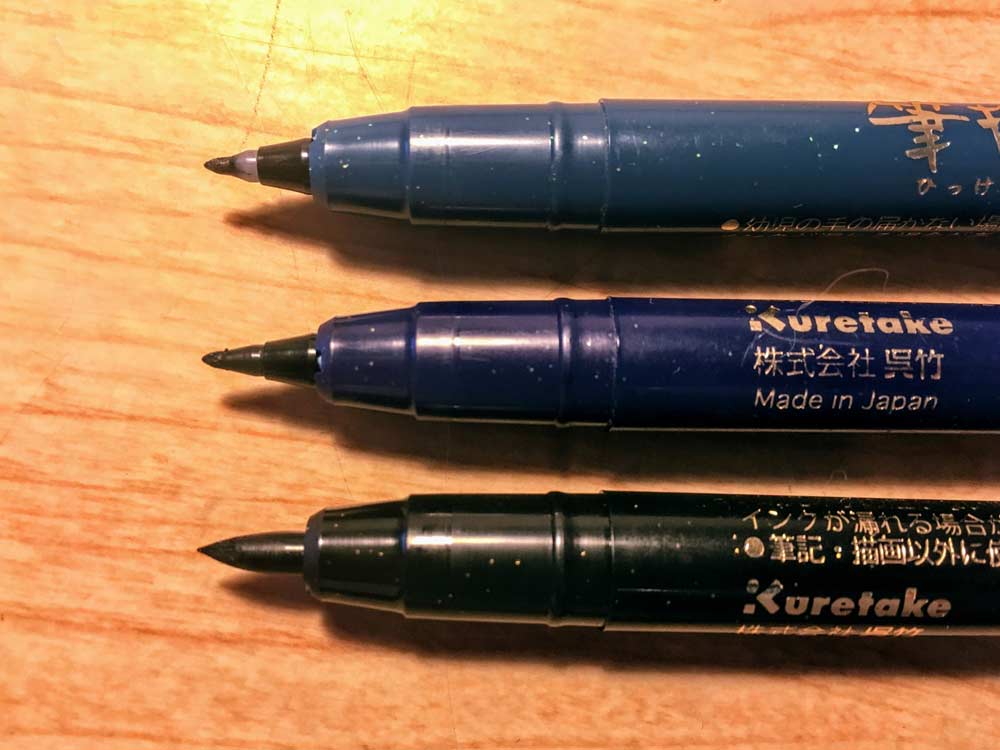 Then I see all the cool kids using them. I’m talking Chris Samnee, Doc Shaner, Dan Panosian, and a few other talented as heck comic artists. There has to be something good there if they are using them. And if you think about it, it’s also a cheap equivalent to a flex fountain pen or on the go dip nib, where you have a stiff but flexible point, instead of a flat line you would get with a Pigma Micron. It’s a little different, but it’s a very similar concept.

All of this set me on my hard tipped brush pen journey, and how I can use them in my process. The manufacturer I’ve got the most from at this point is Kuretake. I’m going to go over all of the ones that I personally have owned and tried.

The first of their hard tipped brush pens I purchased was the Kuretake Disposable Pocket Brush Pen - Extra Fine, which gets an incredibly fine line and retains it’s tip amazingly well. This one takes a decent amount of pressure to get a pretty thicker line, but it’s there if you need it. Ink capacity seems pretty good, I’ve yet to actually empty a pen. The actual flow of the ink out of the pen is a little lower, but it’s not super dry. Water resistant to water proof as well.

In the middle is the Kuretake Disposable Pocket Brush Pen - Fine, and it’s typically a fatter line, as well as much easier to get line variation with minimal pressure placed on the pen. The fine line on this is just a hair fatter than the one on the extra fine, so if you only want to get one to try at the start, I would suggest going for this one. Also near water proof, just a tiny amount of smudging.

The largest size is the Kuretake Disposable Pocket Brush Pen - Medium, and it’s the one I generally use the least. When you are trying to make larger marks with this pen, you’ll end up getting a much dryer line. It’s not too bad when it’s not fully flexed out, but for the widest of lines, it can barely keep up. If you go slow enough, you’ll be fine, but that’s just annoying. This one also showed the most signs of obvious tip wear, it would tend to form a small little nub ball of felt at the tip, which wasn’t as cumbersome as I would have thought, but still annoying.

This isn’t Kuretake’s only line of hard tip brush pens, as they also have the Bimoji line and their Zig Cartoonist. To be quite honest, I can’t tell much if any difference between the way these pens handle. My best guess is the Bimoji line holds more ink, but it also has a much larger pen barrel, costs more.

The Zig Cartoonist line looks near identical, just with different labeling on the outside. These lines all seem to share the same ink type as well if I had to guess, so if you have a paper that hates one of these, it might hate all of them.

They have even further lines you might want to consider, which I have a little bit less experience with since they are not waterproof for the large part. One of my favorites, and a part of their numbered line is the Kuretake No. 33 Brush Pen - Soft, which has one of the most unique tip’s I’ve seen on a brush pen: it feels a hell of a lot like rubber. Most sites say the material is felt, but i beg to differ. It makes a bunch of crazy and fun line shapes with ease, but it’s sadly completely not water proof. Not even a little bit water proof. If you go back to correct your lines with a white out gel pen, it’ll just create a huge gray nasty smear. It’s upsetting, and I wish they could shove a waterproof ink in this one the most. You could also try out the Kuretake No. 6 Double-Sided Brush Pen - Soft - Gray & Black Ink, which has two tips: one like the No. 33, and then another smaller tip filled with gray ink. It’s pretty fun, but again, not water proof or water resistant.

There is also the Kuretake Fudegokochi Brush Pen - Regular - Black, and it’s similar to the Fine Kuretake Disposable brush pen near the top of this post. It’s also not waterproof, but it does have a nice little ink window, and it holds a tip pretty well too.

THe Kuretake No. 14 Pocket Brush Pen - Hard is pretty similar as well to the Kuretake Disposable Fine, but this thing pours out ink, and just looks a little nicer. It’s sadly pretty bad for copy paper, but not too shabby for bristol.

I’ve purchased the Zebra and Tombow brush pens as well, and the comparable models aren’t bad. I’m not mad at any of them, but the Kuretake lines edge out overall for two reasons:

They are cheaper on average. The ink seems to work better with a wider line of paper (less feathering). I might talk about the other brands of hard tipped brush pens later, but for now, if you want to try any, just get 3 sizes of the Kuretake Disposable line and see how you like them.

Overall, the Kuretake Disposable Brush Pen line gets 4 Zaffino Crazy face franks out of 5. Grab a few and try them out, I think you’ll dig them.)