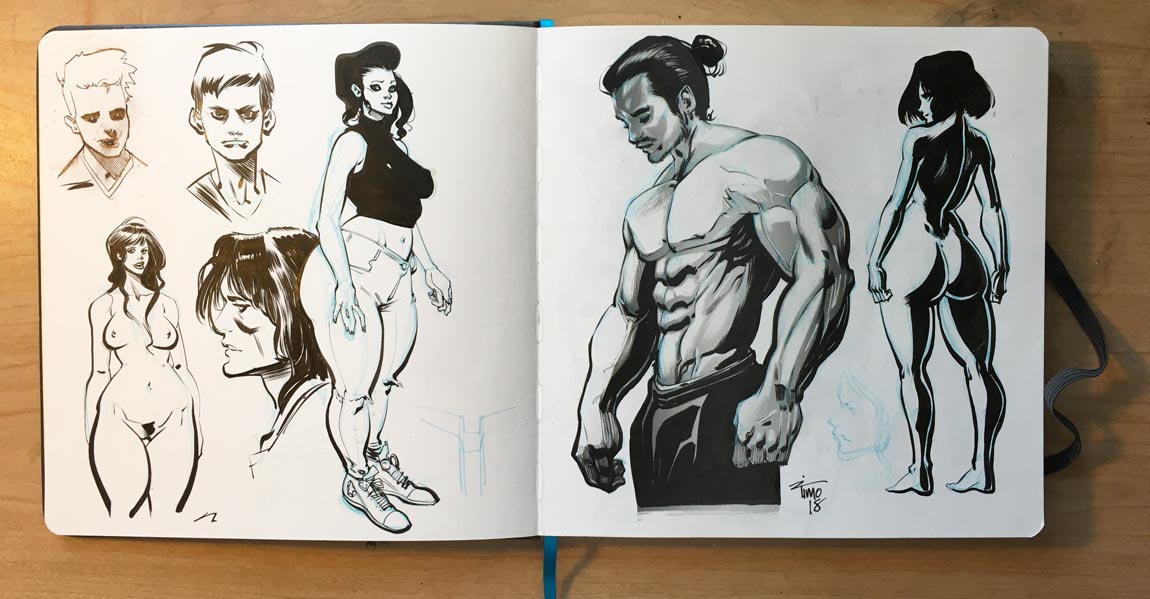 Note: Originally the illo sketchbook 8”x8” different rating, but in retrospect and with more use, I have made an adjustment to it’s final score. Read on to see the change.

The illo sketchbook 8”x8” honestly has some of my favorite paper in a sketchbook. For quite a while, I was looking for a hardback bound sketchbook that had bristol board. To no avail. Such a thing really doesn’t exist. Strathmore’s Visual Journal line has both a smooth and vellum bristol, but it’s wirebound, not many pages, and the cover is ugly as sin. Everything there is a bit of a compromise, so, I’m not really into them. But this, this is so close to perfection. 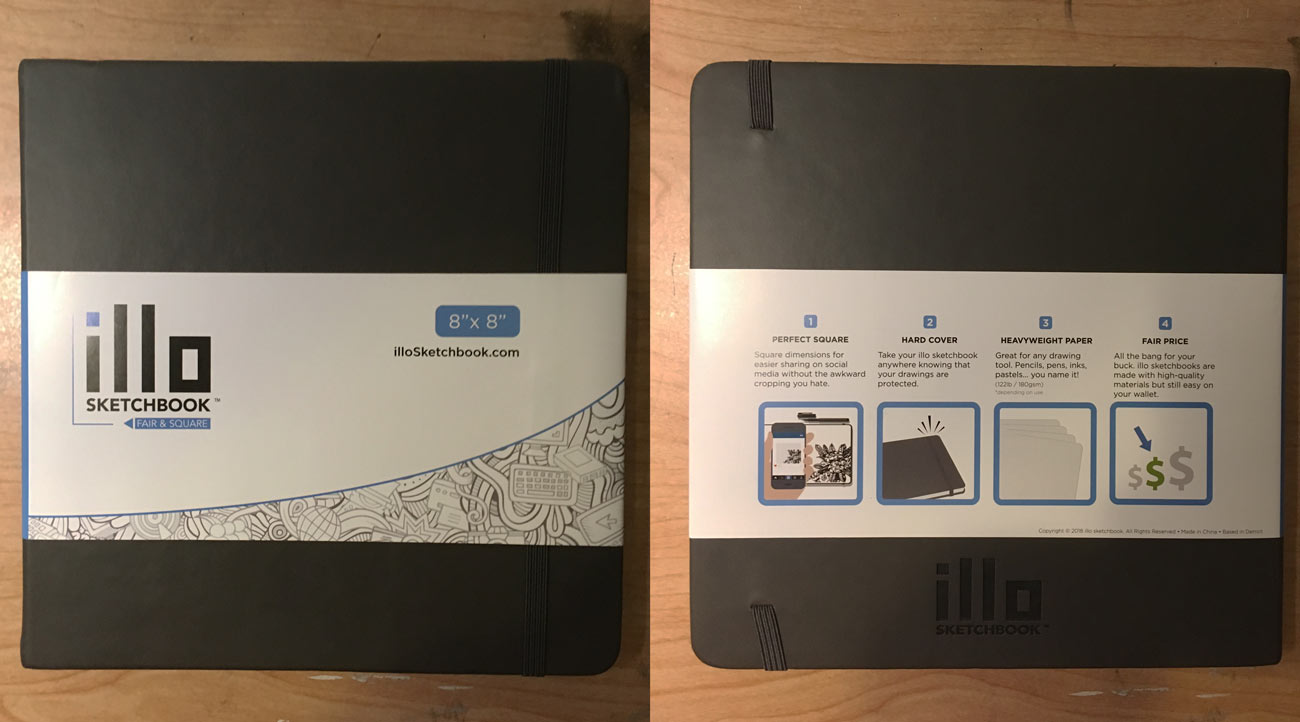 The paper on the illo sketchbook is really, really nice. I’m not kidding when I say it’s like bristol board, pretty close to a smoother plate bristol, but there is a ever so slight tooth to the page. It handles nearly every ink like a dream, and the front and back of the page of a sketchbook handle in about the same. The only real difference is that this isn’t as thick as your standard 2 ply bristol, but it’s got some heft, about 180 gsm. Nearly every ink I’ve thrown at it has taken quite well, i saw the tiniest amount of feathering from the Pentel Pocket Brush Pen, but nothing different that most papers (the ink in that thing just likes to feather is about the best I can tell you).

The other difference, and this one will ding it: the paper is not acid free. They are quite upfront about it, which is cool, but it’s an odd route today. To illustrate this concept, this quote from Artwork Archive should help:

A chemical compound within wood called lignin, mixed with the bleach from the refining process, will turn to hydrochloric acid as the paper ages. The acid will break down the chemical compounds within the paper, resulting in what is commonly seen as yellow and brittle newspaper clippings. -Why You Need to Use Acid-Free Paper on Artwork Archive

Most sketchbooks today are made with acid free paper, for the reason of longevity: acid free paper just degrades at a slower rate. Now what could this mean at the end of the day for this sketchbook? In theory, depending on how you store this sketchbook when you are done, it could degrade at a more advanced rate than others. Is it likely to change that much while you are using it? I doubt it. Your lifetime? It could, if you leave it out in the sun especially. Most likely, the pages will yellow eventually, and will become more brittle at some point. All paper will eventually, but this sketchbook will just do it quicker. This is most likely a trade-off to get so much paper at this price point ($16.75, which is pretty dang good). I’m personally not that worried, but I can see how some people would see this as a huge turnoff.

Back to the good stuff though, it does lay flat pretty easily. You may have to push down on some parts of the sketchbook, but overall this is a well made book. The cover material is a little different, not as slick as a Moleskine, more of a grip to it. It also has a couple of similarities with the Moleskine, like most hardbound sketchbooks these days: a elastic enclosure, place holding ribbon, back pocket to hold some thin documents, and even a similar interior front design with a place for your address and etc. 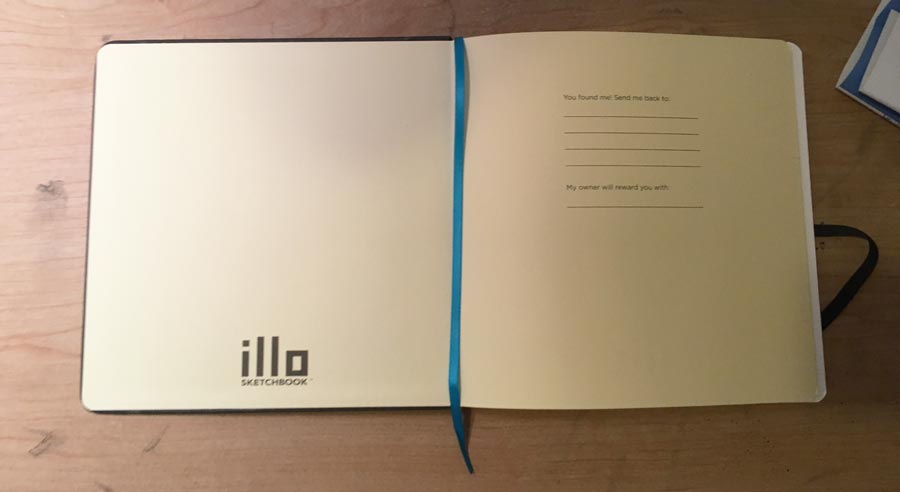 Now, besides from the non acid free paper, my only complaint is the size. It’s not that it’s square, which I originally thought. It’s just that it’s too small of a square for me. 8 inches tall is not what I want out of a sketchbook, I usually like a 7”x10” or, 8.5”x11” (A4-ish). They are releasing a new 10”x10” behemoth sometime in June 2018, and it’s supposed to be a Amazon only release. I want to try that one out when it’s released, because that should end up being better for me and my needs. If you draw in a 5.5”x8” like a Moleskine Large, you should be good though, even more room actually. 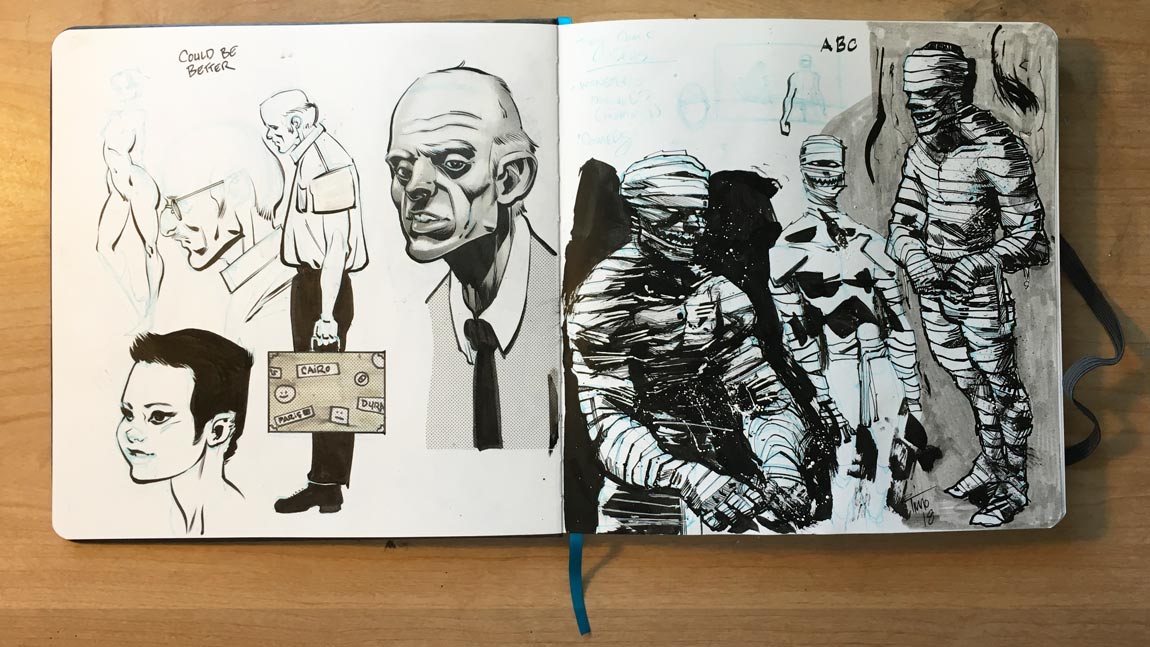 The 8”x8” illo sketchbook as is gets 4 Zaffino Crazy Face Franks out of 5 (Note: Originally the illo sketchbook recieved 3 Zaffino Crazy Face Franks, but this has changed due to me ending up loving it way more than I initially did). Love the paper, even if it isn’t acid free (which is a shame), and the size is prohibitive, but over the last few months I’ve learned to love it. When the new 10”x10” comes out, I’ll check it out and see if i prefer that size more.